The story so far…

Newtown castle is a distinctive 16th century fortified tower house built originally for a branch of the O‘Briens and passing thereafter into the possession of the powerful local family of the O’Loghlens. Peter O’Loghlen –  with a title “Prince of the Burren” – was the last recorded occupant in the late 1800s.

September 1989 – Ballyvaughan local Michael Greene and his wife Mary acquired the property. The tower had lost its roof, its stone fireplaces had been plundered and its ivy strangled walls were crumbling. The adjoining Newtown House and farmyard were in disrepair.

Gradually, the couple undertook the restauration. While Newtown House was being stripped to its core, rebuilt and opened as a guest house, another vision was forming – that of establishing and international art college in the Burren and of restoring the tower house. Years of hard work followed, turning dreams to reality.

June 1994 – The roof – a birdcage cone of seven tons of solid Irish oak – which had been assembled, mortised and tenoned on the ground – was, in one significant gesture, hoisted into place and the castle was crowned again.

July 29th 1994 – The village gathered with visiting academics and artists to witness President Mary Robinson officially open the Burren College or Art and the restored tower house. Newtown Castle, once a forbidding defensive fortress, was alive again as a stronghold of Creativity… We partied till late! 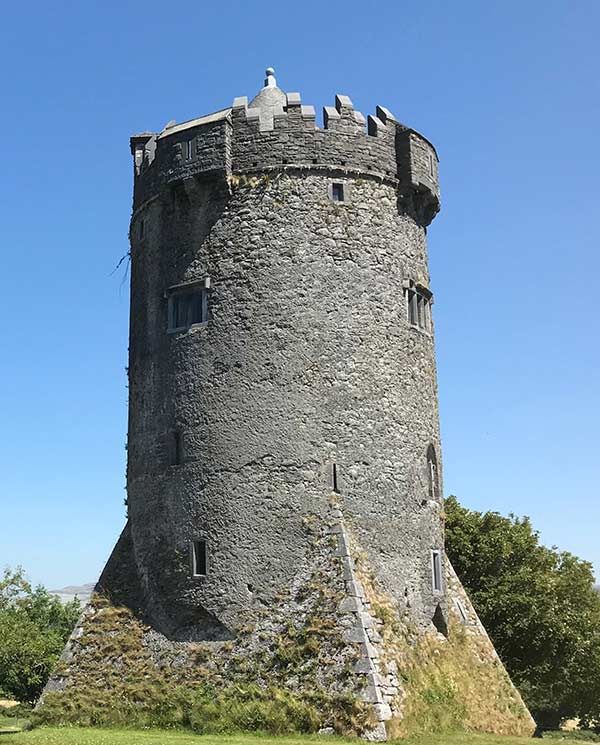 As a fortified tower house, Newtown was essentially a dwelling built with an eye to defence. Its tall, slender profile reflects the vertical arrangement of the living quarters characteristic of such dwellings.

The lower walls act as a sort of buttress, while “shot holes, from which the base of the walls could be raked by fire, are ingeniously contrived behind the flat pointed arches at the base if the round part of the building on all four sides”. (M. Leask) The first three floors exhibit many defensive features such as narrow slit windows, fun loops and murder holes, while around the steeply pitched slated roof is a parapet walk with defended projections or machicoulis.

From Basement to Battlements

Starting on the ground floor and ascending the slender spiral stairway, we find:

Ground floor: Just behind the front entrance on the right, there is a small chamber in the Northeast corner of the base batter, knows as the “doghouse”. The circular main chamber on the ground floor was used for storing food. Its twelve foot thick walls and darkness made it an ideally cool larder. The ceiling is covered in wattle and daub with twigs still intact.

The ground and second floors have very fine examples of original domed wattle ceilings. Wattling was a 5th century Irish craft, where hazel rods were woven into basket weave, turned upside down, supported with beams of timber, then caked with lime and mortar. The lime may well have come from a precursor of the lime kiln on the hill behind the castle, while the sand probably came from the sandpit at the end of the field adjacent to the art college. These were mixed with animal blood to create a kind of concrete and then layered with stone to create a level upper floor.

First floor: Here we find four narrow windows with original mullions and gun loops beside each for defence. The ceiling has been restored to its original former glory with sympathetic use of genuine Irish oak. Another new feature is the cut limestone lintel over the fireplace.

Second floor: features a wattle ceiling, already mentioned, as well as three gun loops and a door from which, it is speculated, occupants could exit the castle by means if a 30 ft ladder.

Main Hall: Situated on the third floor, the Main Hall – with its fine balcony – allows an unimpeded view of the beautiful restoration work done on the roof. The Main Hall, a reflection if the status of the O’Loghlens, provides commanding views of the Burren landscape and Galway Bay from its four windows facing North, South, East and West. To the North, the eye picks out Connemara, Galway Bay, the Martello Tower at Finavarra Point and Ballyvaughan village; to the South – Corkscrew Hill and valley; to the West – Newtown trail with its rich flora and fauna, sheep and goat cahirs, 19th century waterworks, folly and lime kiln.

The battlements and roof have been reconstructed from the remaining corbels and allure wall. Much of the paving of the allure was missing, except for the fragments used as slop stones in places where the parapet wall still existed.

Wedding, conferences, receptions, leadership events, exhibitions and concerts now fill the castle with life year round. The ghosts of the O’Briens and O’Loghlens hover happily as open doors, welcome and hospitality replace the gun loops, murder holes and battlements of the 16th century.

Newtown Castle is open to the public on weekdays free of charge.

Any cookies that may not be particularly necessary for the website to function and is used specifically to collect user personal data via analytics, ads, other embedded contents are termed as non-necessary cookies. It is mandatory to procure user consent prior to running these cookies on your website.